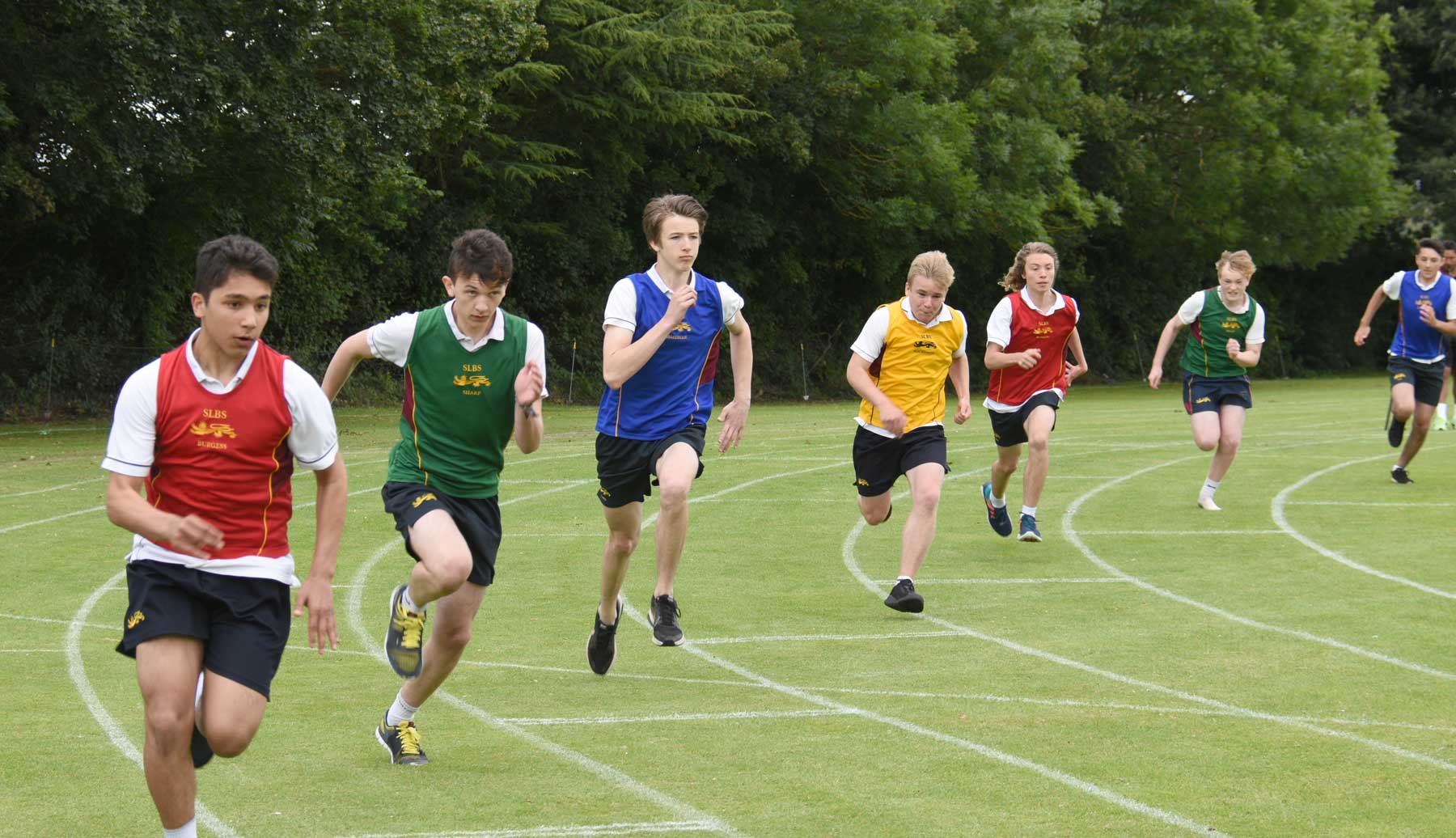 Our five School houses Burgess, Hardman, Mackenzie, Sharp and Young are named after five of the boys who fell in the First World War. There is no attempt in the House system to glorify warfare. Rather, by permanently remembering these boys, there is an opportunity to reflect on the tragedy of the loss of life brought about by warfare. Indeed, we feel profoundly that we do not have the right to forget their lives and the tragic ends to which they came. They bore the weight of their time too heavily. The five boys represented much that we value in the School; all were bright and Archie Hardman, who was also Head Boy, is said to have been a boy of extraordinary intellectual gifts. Young was commended for his leadership throughout his time at the school; he was Head Boy in 1908 and a Payne Smith Medallist, as well as the first Prefect of the ‘Pink’ House when the original House system began.  They were all good sportsmen; Eric Sharp, the Headmaster’s only son, was an outstanding athlete and William ‘Budge’ Burgess is thought by many to have been the finest sportsman ever to attend the Langton. ‘Mac’ Mackenzie was regarded as one of the finest young officers on the Western Front. All were noted for their leadership at School, in their professional lives and whilst serving. And all were noted for their integrity and honour. In short, everything we expect and hope for from our current young men and women.

Students currently at the Langton are likely to live into the 2070s and beyond. Their children will live in the 22nd century. It is our hope that membership of a house will become a lasting memory of the Langton and that some of our students’ stories of their School days will refer to their houses, the lives of the boys lost to warfare and that the sense of the tragedy, horror and obscenity of war is passed on to future generations.

William “Budge” Burgess in many respects embodied the true “Langton Spirit”. He turned out in the annual theatrical productions and was, at the time of his death, the greatest sportsman the school had ever produced.

He was active in all sports, particularly football and cricket. He played in the school 1st XI captained by Eric Sharp and, in the 1913/14 season, he scored 51 goals as centre forward for the school 1st XI and captained the cricket team, scoring two centuries.
After leaving school in the summer of 1914 he transferred to Goldsmiths’ Teacher Training College to read for a B.A.

He arrived in France on June 26th 1916, a few days before the “Great Push” on the Somme as a lieutenant with the 6th Berkshires. The Battalion found itself engaged at Mametz Wood and attacked the Northern section of the wood on the 19th and 20th July suffering heavily, occasionally from “friendly fire”. The Battalion dug in at 2.15 on the afternoon of the 19th to repulse the many German counter attacks. They were bombed and attacked constantly for the next twenty four hours but held their position until relieved on the 22nd, by which time they had lost 40% of their original number. This was the last major action on the Somme for the Berkshires and William Burgess was killed, almost certainly on the 19th, just 25 days after first landing in France. His body was lost on the Somme; initially buried in a shallow grave, and subsequently devastated as the battle continued to rage. He is commemorated on the Thiepval Memorial to the Missing.

Archie Hardman joined the Langton in the latter part of the Nineteenth Century, becoming Head Boy in 1902. He ended his time at the school as Commander in Chief of the school’s cadet force.

Hardman played full back for the Langton football team and was a 1st XI cricketer, but upon leaving school he took up a position with a bank in Kensington. This he resigned in 1907 to retrain as a teacher, first at the Mathematical School in Rochester and afterwards at Sheffield Grammar School.

He joined the King’s Own Yorkshire Light Infantry in 1916 in time to take part in the Battle of the Somme where he received a gunshot wound in the shoulder at Mametz Wood, which invalided him back home.

In February 1917 he returned to his regiment in time for the Battle of Arras at Easter and by July 1917 he had been promoted to the rank of acting Captain. On October 4th the battalion set out for the objective of Reutel, near Passchendaele, negotiating a number of heavily armed pill boxes.

Reutel was taken by the battalion, but not before a fearsome enemy barrage and enfilade machine gun fire had decimated their number. Archie Hardman was killed in this action, aged 32. He was hit in the right temple by a machine gun bullet and death was instantaneous. His body was never recovered from the battlefield and he is commemorated on the wall of the Tyne Cot Memorial to the Missing about two miles from where he was killed.

‘Mac’ Mackenzie proved to a very able sportsman at the Langton and played for both the school football and cricket teams, as well as winning a number of athletic events at the annual school sports day.

After leaving The Langton in 1909, Mackenzie joined the civil service and also the London Scottish Territorial Regiment. When war broke out he enlisted immediately into his regiment as a private. January 1915 found him on the Western Front. He wrote cheerfully home to declare that “I am all right except for a bit of cold on my chest and feet!”

By May Mackenzie had been promoted to Corporal. Shortly afterwards he was discharged from the London Scottish and commissioned Captain in the Liverpool Regiment, conveniently stationed at that time in Canterbury. February 1917 found him on the front line and he was wounded almost immediately. The Medical Board report of 21st July 1917 records that he was burned and blistered and his eyes were scorched.

On September 25th 1917 he returned to duty on the Passchendaele front around Poelcapelle. At 10 pm on Christmas Eve, Mackenzie went out on patrol with three other men to reconnoiter a pillbox. They crawled from the security of their trench towards the enemy line until, about 10 yards from the position, the enemy opened fire from three rifles and a machine gun. Mac was hit by a single bullet. He died on his way down to the dressing station. He was buried near the village of Elverdinge and his grave later grouped together with those known as Canada Farm.

Eric Sharp left the Langton in 1911 after a glittering school career which saw him as the captain of the school 1st XI football team and Champion Athlete. He was the only son of the Headmaster, John Henry Sharp.

When war broke out in 1914 he joined the Royal Fusiliers as a Private, but soon obtained his commission, being gazetted to the Buffs.

The battalion, however, was detailed for support at home, much to Sharp’s chagrin. He twice attempted to get back to his old battalion and then seized an opportunity to join the King’s African Rifles, shortly before they embarked for Africa.

On May 8th 1917, at Libembo, in what was then known as German Tanganyika, he took his platoon across an open space of about 100 yards to some rocks, where the enemy were thought to be concealed. He dashed the rocks, but found no-one. Later, a short distance away at Kitanda, he again made a forced march to the enemy camp and advanced to within about 20 yards of the enemy position giving orders to his men, the Askari tribesmen, to lie down. Suddenly, a murderous machine gun retort opened on the platoon. Sharp blew his whistle and charged, but, in a cruel twist of fate, the Askari failed to hear the whistle above the gunfire and, consequently, didn’t move in support. Sharp charged the guns to almost certain death. He was shot through the head and shoulder and was found when his men advanced later. Death was not instantaneous and he was taken to hospital where he died of wounds on May 22nd. He is buried at Dar es Salaam War Cemetery, Tanzania.

Our newest House remembers the first Old Boy of the school to fall in his country’s cause. Philip Mortlock Young entered the school in 1903, and his obituary in the school magazine, The Langtonian, is a lasting testament to the impression that he left on all those around him; both masters and students alike thought of him as ‘a young man gifted so splendidly in mind and body, and, above all, in character’.  This was evident throughout his time at the school, as his sporting success in athletics saw him become a school Sports Champion, and his exceptional academic achievements enabled him to take a B.A. in French and Latin at the University of Wales, where he excelled at rugby and rowing.  Young then went on to Clare College, Cambridge, where he was a rowing Captain, and left with a degree in Classical Tripos.

Young was commended for his leadership throughout his time at the school; he was Head Boy in 1908 and a Payne Smith Medallist, as well as the first Prefect of the ‘Pink’ House when the original House system began. The strength of Young’s generous and sporting character stands out above all his achievements, and was evident when he narrowly missed out on a prize for the best boy in the school; he set aside any personal disappointment, and wrote a letter to the school, congratulating his opponent and expressing his pleasure that the other boy had won.

When war broke out, Young, who was already a member of the Officers’ Training Corps, offered his services. He was promoted to Lieutenant in the King’s (Liverpool Regiment), and went to France where he spent some months fighting in battles across the front.  On the 10th March 1915, at the age of 23, Young was part of an attack on Givenchy Ridge.  He was the only officer to make it through the German barbed wire and onto the parapet of the enemy trench, before he was killed.  Young’s sacrifice, along with many others, contributed to the victory that day at Neuve Chapelle. He is commemorated at Le Touret Memorial, in Richebourg l’Avoué.